The Point 65 Falcon modular sit-on-top kayak is the new & improved replacement for the very popular (and now discontinued) model, the Point 65 Apollo.

The Falcon is a fun, versatile, high-performance kayak which, due to its modularity, is exceptionally easy to carry, store and haul. The revolutionary, patented Solo-Tandem-or- more combination is the solution you were waiting for.

INCLUDES 2 PADDLES! The Point 65 Easy Tourer Basic is an extremely light paddle with an aluminum shaft and durable nylon blades.

Why A Modular Kayak?

Snap in the mid-section and your Solo transforms into a high-performance Tandem. Add another mid-section and it’s a Triple! Keep adding mid-sections and create the perfect team-building tool for as many paddlers as you want.

The Falcon Tandem easily fits into the back of a Toyota Prius. So, no roof rack, no lifting and you also keep the low gas mileage. Fits into  a small elevator, and stored under your bed or closet! Never before has a kayak been so much fun and so easy to own. 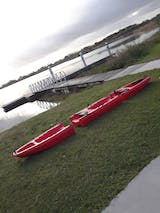 Very easy to assemble (start with the back piece), fits easily in the car, very good floatability, stability and speed on both lake and ocean (4 feet waves).
In tandem mode it leaks a bit through the joints but it’s normal.
It floats even when full of water.
Carrying it inside the vehicle saves 12 mpg.
A very big Bravo to Kayak Creek, very professional

R
Rhonda
Able to transport in small car, challenging for one person to (un)assemble

Overall, it met a primary objective of being able to transport the kayak in my small, 2-door Honda CRZ. It maneuvers well for my intended uses, in calm rivers and lakes; have yet to take it in the surf.

However, there are several features that make this kayak less than ideal if you have other ways of transporting a kayak.

Putting the kayak together
Not too bad as long as there is grass. On a sloped or concrete boat ramp the kayak will slide as you press it together, making it hard to snap together

Taking the kayak apart
This is the most challenging. It requires holding down the clamp release with your thumbs and then grabbing the kayak (which is too tall for me to grab easily, especially with my thumbs needing to push in the releases) and lifting it out of the bottom groove and far enough to release the ratcheting straps. If the straps don’t come out all the way, the kayak falls back into its gripped location.

I’ve started to carry a PVC pipe that I use to lift up the part of the kayak without the straps, enabling a way for kayak half to drop instead of being lifted so high.

Quality
In transporting the assembled kayak on a rack, a bump caused the screws holding the black plastic nob for connecting two of the halves to pop out. Seeing how the screws are attached, makes me wonder how well the kayak will hold up.

Other input
It could use more handles. The end pieces are more difficult to carry than they need to be.
The footrests/indentions are shallow and difficult to get much grip with your feet
Water gathers in the seat area and leaks into the latched storage area; therefore, it helps having a sponge and robust dry bag.

The Falcon is an entry level kayak and my first kayak. I love the fact that it breaks down for easy transport and storage. I had a little difficulty putting it together and taking it apart by myself, but find that with a helper it goes together and comes apart quite easily. I took it out today for the first time and had a wonderful time!

End to end service and product has been great